The best way to learn about augmented reality is to use it. The easiest and most cost-effective way to experiment with augmented reality (AR) is with an app. AR uses the camera from a smartphone or tablet to take in information from your surroundings.

The information is fed into an app and that app can be programmed to superimpose images, audio, or other computer generated media when a trigger point is reached. That trigger point can take the form of a specific object, a longitude and latitude registered via GPS, or a person’s face. Here are a few examples you might want to try in y 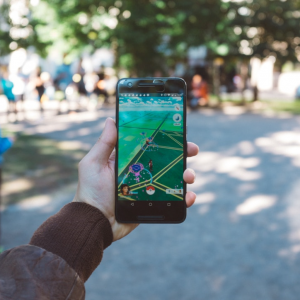 Pokemon Go: This one is incredibly popular across multiple age groups. It uses GPS on your phone to pinpoint location, your smartphone camera takes in images, and the app superimposes Pokemon at specific GPS location. So if you see someone walk into a tree with their phone held out in front of them, it’s possible they were trying to catch Pokemon.

BBC Civilisations AR: This app was made by the British Broadcasting Corporation (BBC). They selected 40 different historical objects from famous museums and developed this app to allow people from around the world to project and explore there objects in their own home. They hope to gain user feedback to improve their project, so feel free to let them know what you’d like to see from an app like this in the future.

Metaverse: This augmented reality platform will let you try building your own AR app for free! They have plenty of walk-through tutorials to get you started with programming different images, animations, and interactive library games to pop up throughout your library building and surrounding area. Have fun exploring!

Google Expeditions: Of course Google has some AR apps. They also dove into AR platforms. Google Expeditions is designed to allow users to explore and learn more about different world landmarks, weather phenomenon, hard-to-reach locations, get up close and personal with animals, and digitally explore the world. Just a heads up that this app has VR and AR options. The VR side has had mixed reviews with compatibility issues for different headsets. The AR has better reviews, but takes a bit of practice to implement.

This entry was posted in General, Pretty Sweet Tech, Technology. Bookmark the permalink.