Teens Top Ten Recently the Young Adult Library Services Association (YALSA), a section of the American Library Association (ALA) announced this year’s Teens Top Ten.  The titles are voted on by teens across the country from a list created by 15 designated teen groups in the U.S.  The 2018 Teens’ Top Ten PDF with annotations. The list of 25 titles the teens chose from is also available.  Additionally, any reader from age 12 to 18 can nominate a title to be considered for the list by going to the nomination form. You can learn more about the Teens Top Ten by visiting YALSA’s website for it. 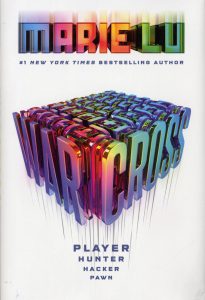 One of the Top Ten I have read that is intriguing and complicated (in a good way) is Warcross by Marie Lu.  Emika Chen (18) is one of the millions of players who log into Warcross every day. The virtual reality game began 10 years ago, and now it has become a way of life. Emika, a top coder and bounty hunter, is not your average Warcross player. Desperate for money to pay her bills, she risks everything by hacking into the Warcross championships, but instead she glitches herself into the game and everyone sees her true identity. Emika believes she will be arrested, but instead the game’s creator has other plans. Billionaire Hideo Tanaka decides to pay off Emika’s debt and offer her a job. Will Emika accept the bounty job and help uncover a sinister plot against the Warcross game and its players? Action-packed science fiction novel that will keep you guessing until the very end!  Plus the sequel, Wildcard, came out in September (I haven’t read it yet). (The Nebraska Library Commission receives free copies of children’s and young adult books for review from a number of publishers. After review, the books are distributed free, via the Regional Library Systems, to Nebraska school and public libraries.)
This entry was posted in Books & Reading, General, Youth Services. Bookmark the permalink.