Save the Date for Fall Book Celebrations

Nebraska books and writers will be featured and celebrated at two events in Lincoln, so save the dates for the Nebraska Book Festival on August 25, 2018 and Celebration of Nebraska Books on October 27, 2018. These two events will highlight work by Nebraska writers and publishers, featuring stories and poetry set in Nebraska. 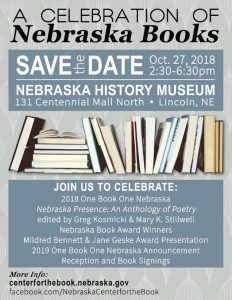 The October 27 Celebration of Nebraska Books will be held at the Nebraska History Museum, 131 Centennial Mall North. The winners of the 2018 Nebraska Book Awards—Nebraska’s prestigious awards for literacy, writing, and publishing—will read from their winning books and sign copies of the books. Nominate books for the Nebraska Book Awards at http://centerforthebook.nebraska.gov/awards/nebookawards.html. The Celebration will also feature poetry readings in honor of the 2018 One Book One Nebraska book selection, Nebraska Presence: An Anthology of Poetry (The Backwaters Press, 2007) edited by Greg Kosmicki and Mary K. Stillwell.

Awards will be presented to supporters of Nebraska writing. The Mildred Bennett Award will recognize an individual who has made a significant contribution to fostering the literary tradition in Nebraska, reminding us of the literary and intellectual traditions that enrich our lives and mold our world. The Jane Geske Award will be presented to a Nebraska organization for exceptional contribution to literacy, books, reading, libraries, or literature in Nebraska. It commemorates Geske’s passion for books, and was established in recognition of her contributions to the well-being of Nebraska libraries. Nomination forms are available at http://centerforthebook.nebraska.gov/nominationforms.html.

The Nebraska Cen­ter for the Book An­nual Meeting will be held at 1:30 p.m.—just prior to the Celebration of Nebraska Books. An Awards Reception honoring the winners, book signings, and announcement of the 2019 One Book One Nebraska book choice will conclude the festivities. The 2018 Celebration of Nebraska Books is sponsored by the Nebraska Center for the Book (NCB), Nebraska Library Commis­sion, and History Nebraska—with Humanities Nebraska supporting the One Book One Nebraska presentation. For more information see http://centerforthebook.nebraska.gov/programs/celebration.html and https://www.facebook.com/NebraskaCenterfortheBook.

This entry was posted in Books & Reading, Education & Training, General, Nebraska Center for the Book, Programming. Bookmark the permalink.