Friday Reads; The Woman in Cabin 10, by Ruth Ware

In Ruth Ware’s The Woman in Cabin 10, it’s the old set up on a cruise ship, there’s a lady in a cabin, but she isn’t really there. There were sounds of a struggle, and a body hitting the water, a smear of some substance on a privacy screen like blood, but in the morning, nothing. The night before there had been suitcases, and clothing in the cabin. In the morning it is completely bare 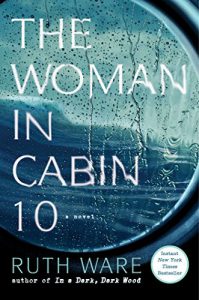 The Woman in Cabin 10

Lo (Laura) Blacklock wouldn’t have heard the sounds from the cabin next door, except, within days of the trip, her flat in London was broken into while she slept. The burglar actually locked her in her bedroom while he burgled her flat. She’s gone through the trouble of replacing her phone, money and credit cards, but the break in has deeply disturbed her. To top it all off, she’s had a fight with her boyfriend, a photojournalist just back from a foreign shoot. She’s sleep deprived. anxious, and now, can’t find the mysterious young woman, approximately her age, who she borrowed mascara from in cabin 10 next door. Worse, none of the crew or passengers are missing.

But this time, the cruise ship, the cruise, and the passengers are all rather unique. It’s a very, very small, very exclusive cruise ship, more like a large yacht. Fitted out sumptuously, with guests to both fit the setting, and to advertise it–a few of the rich, the owner and his dying wife, travel journalists, a renowned photographer, all to advertise the maiden voyage of the Aurora Borealis, as it sets off from London to sight see the fjords of Norway, cities of the cold northern waters, as well as watch the Northern Lights. And Lo has gotten the chance of a lifetime to go, instead of the owner/head writer of the travel magazine she works for.

On top of the regular narrative are inset emails and online conversations from family and friends unable to contact Lo, foreshadowing a darker, more personal fate for Lo. It all works together to come to an altogether unexpected series of twists. The book is definitely a page turner, as Lo gets herself into trouble taking us right with her.
The Woman in Cabin 10, a novel, by Ruth Ware, Scout Press, imprint of Simon & Schuster, Inc., hardcover 9781501132933, softcopy 9781501132957, e-book 9781501132940