Friday Reads: The Fire Next Time, by James Baldwin 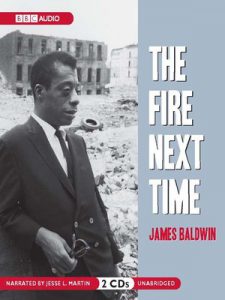 After watching I Am Not Your Negro, the Oscar-nominated documentary based on an unfinished James Baldwin manuscript, I finally tracked down and read Baldwin’s much-referenced 1963 book, The Fire Next Time. This book contains two essays: “My Dungeon Shook—Letter to my Nephew on the One Hundredth Anniversary of Emancipation,” and “Down At The Cross—Letter from a Region of My Mind.”

In the first essay, Baldwin endeavors to impart to his 15-year-old nephew the wisdom and advice he’ll need to survive growing up as a black man in America. Despite being “born into a society which spelled out with brutal clarity and in as many ways as possible that you were a worthless human being,” Baldwin urges his nephew to trust his own experience, to resist internalizing messages of inferiority, and to continue to love. And in a more sophisticated exhortation than our contemporary “Make America Great Again” slogan, Baldwin writes: “Great men have done great things here and will again and we can make America what America must become.” This essay actually served as inspiration for Ta-Nehisi Coates’s 2015 book, Between the World and Me, which took the form of a letter to his own teenage son. The tragedy, of course, is that such letters are still necessary.

The second essay, “Down At The Cross—Letter from a Region of My Mind,” is quite a bit longer than the first. In it Baldwin recounts his experiences with the Christian church during his youth and the Nation of Islam as an adult, seeing in neither a solution to the racial problems that infect America. Throughout, he offers an unsparing analysis of the problematic role race has played in the development of American civilization, “which compromises, when it does not corrupt, all the American efforts to build a better world…”

This essay is a demoralizing read because of how applicable Baldwin’s criticisms remain. “People are not, for example,” Baldwin writes, “terribly anxious to be equal (equal, after all to what and to whom?) but they love the idea of being superior.” And also: “It is rare indeed that people give. Most people guard and keep; they suppose that it is they themselves and what they identify with themselves that they are guarding and keeping, whereas what they are actually guarding and keeping is their system of reality and what they assume themselves to be.”

Baldwin’s writing is not without hope, but his is a bleak optimism–more philosophical choice than true faith. This perspective is powerfully captured in a 1963 television interview (“The Negro and The American Promise,” WGBH), in his response to a question about whether he is a pessimist or optimist: “I can’t be a pessimist because I’m alive. To be a pessimist means that you have agreed that human life is an academic matter, so I’m forced to be an optimist. I’m forced to believe that we can survive whatever we must survive.” As he did in his letter to his nephew, in this essay he holds out love as the only way forward. But he makes clear that when he uses the word “love” he is referring to “a state of being, or a state of grace—not in the infantile American sense of being made happy but in the tough and universal sense of quest and daring and growth.”

1 Response to Friday Reads: The Fire Next Time, by James Baldwin