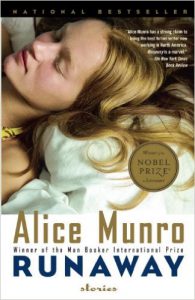 This stunning collection of short stories illuminates the human condition—warts and all! “Runaway,” the title story, is such a carefully crafted examination of three flawed humans that when I reached the end I sucked in my breath, put the book down, and debated whether to pick it back up again to read the next story. Eventually I did and I’m so glad I did, but I did need a little time to catch my breath.

“Powers,” divided into five sections, uses diary entries and letters to tell the story in the real, genuine voices of the characters. We meet these characters over a period of time and the interplay between them really shows the depths of their personalities and their true natures. The story shows a lifelong journey toward self-awareness, but do they make it to the destination?

One set of stories— “Chance,” “Soon” and “Silence,” —allows us to peek in on the protagonist’s life at various stages. Together these three stories give such a complete detailed picture of her that readers feel like we know her very well, even though we’ve only seen her through three short vignettes. As with all these stories, we may get to know ourselves a little better as we reflect on her feelings and reactions to key incidents in her life.

Munro’s skill as a writer is so evident in all of these stories. She is never manipulative, always presenting straight-forward and minimalist prose. And did I mention stunning? In 2013, she won the Nobel Prize in Literature for “Dear Life: Stories” (Vintage, 2012), another book that demonstrates why she is considered by many to be the “best short-story writer in English today.”

Spoiler Alert (especially for my Bookclub): If you are into happy endings, they are not to be found in this book. But even though the stories are dark, the prose is so light that they are not depressing—just sad. But I promise you’ll be thinking about these characters and their stories long after you finish the book.