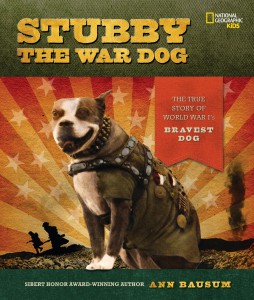 I have been reading books for preschool through high school ages preparing for next year’s summer reading program “Every Hero Has a Story.”  Among my favorites so far is a nonfiction title: Stubby the War Dog by Ann Bausum, written for grades 4-7.   Stubby was a stray who connected with J. Robert Conroy, an enlisted man among many who were training on Yale’s athletic grounds in 1917.  When the time came to ship out, Stubby was smuggled on board and soon was considered by all to be a part of the unit. He brought companionship and relieved tedium, but also helped his fellow soldiers by killing rats in the trenches, warning them of imminent gas attacks, and even captured a German soldier on his own. Period photographs of Stubby and of the countryside at that time help to bring his story to life.  And just so you know, Stubby made it back home, and so did his best buddy Conroy.
This entry was posted in Books & Reading, General and tagged Friday Reads. Bookmark the permalink.