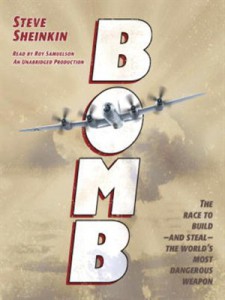 At the end of summer, my 12-year-old son and I road tripped to South Texas to visit friends. This involved a two-day drive down and a two-day drive back. To me, road trips mean audiobooks. Although my son is the stereotypical boy who doesn’t read, he has enjoyed audiobooks in the past; therefore I came prepared with three young adult possibilities, checked out from OverDrive and downloaded to my Kindle Fire: a dystopian thriller, a baseball mystery, and a nonfiction history book.

Listening to an audiobook held no appeal for him on the way down to Texas, but on the way back, the novelty of road tripping having completely worn off, he gave in to my suggestion that he select a title for us to listen to. Scanning the three I’d downloaded, it was really no contest: he immediately picked the nonfiction history book, Bomb: The Race to Build—and Steal—the World’s Most Dangerous Weapon, by Steve Sheinkin.

This is a great example of a nonfiction title that reads like fiction, and my son was rapt throughout the seven hour narration. The story jumps back and forth between Soviet agents recruiting young, initially unemployed U.S. chemist Harry Gold as a spy, Robert Oppenheimer’s efforts to assemble a team of scientists to build an atomic bomb at Los Alamos, and Norwegian resistance fighters’ intricate and ultimately successful plan to sabotage a heavy water plant in Norway in order to disrupt Nazi development of nuclear weapons.

The plot involving the Norwegian commandos was like something out of a James Bond or Mission Impossible movie, and my son sat bolt upright in his seat, the Kindle held to his ear so he wouldn’t miss a word. At one point he exclaimed “I could listen to this book forever!” Talk about music to a librarian mother’s ears! And when the team succeeded in infiltrating and blowing up the plant, he reacted with a fist pump and a “Yes!”

Learning about the espionage networks at work at the time was also fascinating. One of my favorite scenes involved two spies meeting up. Their handlers had given each spy half a Jell-O box cover. At first contact each man produced his half of the Jell-O box cover; when placed next to one another they matched up perfectly, letting each spy know that the other was legitimate.

Upon returning home I looked up author Steve Sheinkin and discovered that he’s penned additional nonfiction history books for young adults. And what do you know! My son had previously read and enjoyed two of them: The Notorious Benedict Arnold: A True Story of Adventure, Heroism & Treachery and King George: What Was His Problem?: The Whole Hilarious Story of the American Revolution. Given his 100% satisfaction rating to date, Steve Sheinkin is definitely an author who’ll stay on my radar as I continue to search for the right books for my particular reluctant reader!