Posted on September 24, 2013 by Kathryn Brockmeier 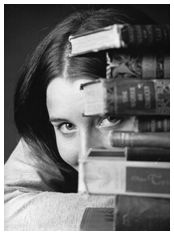 In this series, New Faces, the Nebraska Library Commission will interview someone from the next generation of Nebraska librarians. Today we are speaking with Emily McIllece, Reference Associate and Dual Enrollment Coordinator at the University of Nebraska Omaha Criss Library. She previously worked in her hometown library and another college library, and has worked as a newspaper reporter and freelance writer. Emily received her Master’s degree in Library and Information Science from the University of Missouri – Columbia in May 2013. She is a 2011 and 2012 Nebraska Library Commission / Institute of Museum and Library Services Laura Bush 21st Century Librarian scholarship recipient. NLC: What brought you to the world of library work? How is it you went to library school? EMILY MCILLECE: In college, I’d worked at my hometown and college libraries, both jobs I absolutely loved. But after graduation, I worked for a couple years at the Council Bluffs newspaper. It wasn’t the job for me. So, I applied for library positions and was turned down because I didn’t have the degree. Finally, I decided to take a part-time library clerk position, freelance copywrite on the side, and get my MLS. It was scary—but a great decision! NLC: What did you learn in your coursework that surprised you the most? Complete the sentence, “I had no idea….” EMILY MCILLECE: …how far librarianship can stretch into “non-library” roles. NLC: How would you like to make a difference in the lives of library users or in the community your library serves? EMILY MCILLECE: Showing students they’re not alone, that we are a fantastic resource for them, and that they shouldn’t be nervous or shy about asking for help. It’s always a neat moment when you make a connection with a student and the once daunting research assignment is suddenly obtainable. NLC: What do you find most rewarding in your library job? EMILY MCILLECE: When a panicked patron walks away with a smile. NLC: What are your hobbies? EMILY MCILLECE: Writing, sailing, horseback riding. NLC: What are you reading right now? EMILY MCILLECE: To Say Nothing of the Dog by Connie Willis, print book. NLC: What’s the most useful non-library work experience you bring to a library job? EMILY MCILLECE: My time as reporter is really handy when explaining the strengths and weaknesses in using newspaper articles as a research source. I also love to create fanvids (music videos of a genre, like Star Wars or X-Men) for my own amusement, which helps if we make video tutorials. NLC: What does the future hold for libraries? EMILY MCILLECE: We’re branching out. More libraries are embracing libraries as community centers, and we’re starting to see that in the academic world, too. I think we’ll always be fighting for every cent of our budget, but I think in the next few years, the general population will associate us with more than books. Books are awesome, and we’re not going to “abandon” them, but I think as we get better with marketing ourselves and integrating services into the community, people will see beyond the stacks. — The New Faces project is made possible by a Laura Bush 21st Century Librarian grant to the Nebraska Library Commission from the Institute of Museum and Library Services.
This entry was posted in General, Now hiring @ your library and tagged New Faces. Bookmark the permalink.