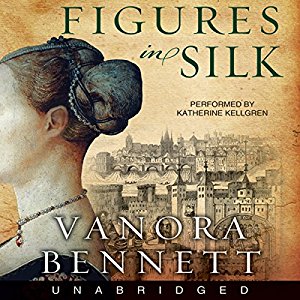 Figures in Silk, by Vanora Bennett, once again falls into my favorite genre to read: historical fiction.  It is a glimpse into early Tudor history: not into life at court itself, but rather into the way that the political machinations affected and disrupted the lives of London’s ordinary citizens and particularly its powerful merchants.

The year is 1471.   Edward IV, who won the throne with the help of his brother, Richard, Duke of Gloucester, is restoring law and order after the long years of war during the War of the Roses. Under Edward IV, life in England begins to improve. Business is booming once more and the printing and silk industries prosper in London.

When silk merchant John Lambert marries off his two beautiful daughters, their fortunes are forever changed. Elder daughter Jane Shore begins a notorious liaison with the king while industrious and clever Isabel finds herself married into the house of Claver, a wealthy silk dynasty. Fate delivers Isabel a challenge when her new husband is killed and she is forced into apprenticeship to her mother-in-law, Alice Claver.

Isabel is already an accomplished embroiderer of silk in her own right, but it is from Alice Claver that Isabel learns all there is to know about the silk trade and its’ purchase from Italy, Persia, Spain, Tunisia, and beyond. Isabel learns to make her way in this new world of silk and forges a contract with her sister’s lover, King Edward IV.  This new contract allows Isabel to bring silk production to London for the first time, and to hopefully break the monopoly that Venetian silk makers have over the silk trade.

As Isabel grows in power, and her plan for a silk industry run by Englishwomen is set into motion, the political landscape shifts in dangerous ways.  One sister will fall as the other rises and choices must be made that will change their lives forever.

If you enjoyed Vanora Bennett’s first novel Portrait of an Unknown Woman, you will definitely enjoy Figures in Silk!