The Great War (later known as World War I) was the first large multi-country conflict in which United States forces fought. Although the U.S. took an non-intervention stance when the war started in 1914, Congress declared war and joined the Allies in April 1917 after Germany returned to torpedoing U.S. ships and offered Mexico financing to attack the U.S. on its southern border. While it took almost a year for the American Expeditionary Forces (AEF) to arrive in France in great numbers, AEF was established one hundred years ago this month under the command of General John J. “Black Jack” Pershing.

Pershing started his military career at forts in the western 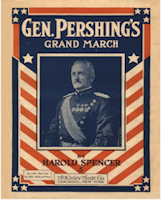 territories after graduating from West Point in 1886. After fighting in several Indian campaigns, he was assigned to the University of Nebraska in Lincoln as a professor for military science and tactics and Commandant of Cadets (at left Pershing with some of his staff at the University, Townsend Studio Collection) . While there, Pershing formed a drill company which was later renamed the Pershing Rifles. Pershing attended the UNL law school and took his degree in 1893. Pershing is remembered in the naming of several buildings in Lincoln, including an elementary school and an event facility. And while they may have been singing Gershwin’s “Over There” on Broadway, Fall City’s own Harold Spencer honored Pershing with “General Pershing’s Grand March” (above right, Polley Music Library Collection). 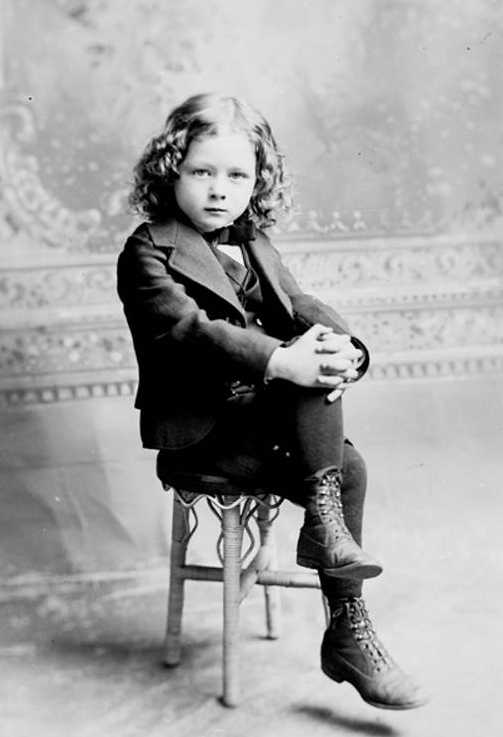 Young men such as Marvin Murphy (above, Butler County Gallery) volunteered from towns across Nebraska joined the fight. Of course this photo was taken a few years before Marvin served in France and Germany at the age of twenty-two. As did many Nebraska veterans, Marvin returned to Nebraska, raised his family, worked in the family business, and served in a civic capacity. 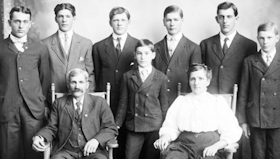 Some families saw more than one son off to war. The two youngest sons of Joseph Welty both served in the war (at left, Butler County Gallery). Herbert would also have been twenty-two and Paul twenty-six. Three of the sons already had military experience, serving with the Nebraska National Guard during the Mexican insurrection in 1916. And, as happens in small towns, relativ 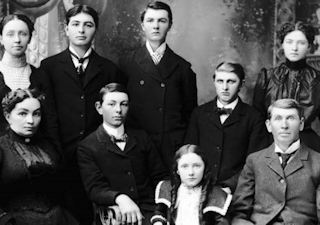 es through marriage also served in the military. Louis Welty, the second oldest son, married Mary Rosetta Delaney (standing at far right in the photo at right) whose younger brothers Charles (seated next to their mother) and Michael (seated next to Mary) were two of the older participants in the Great War. Charles was thirty-five in 1918 and Michael thirty-eight. 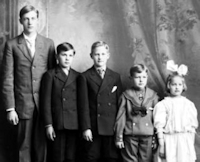 Not all the volunteers served in the army or overseas during the war. From the George Schweser family (at left, Butler County Gallery), Harold, the oldest served as a lieutenant in the Balloon Service in Oklahoma. Closer to home, at Fort Omaha, was the Balloon School (at right, Omaha Public Library Collection) which taught about 800 men for the Signal Corp in the war. Carl, the second oldest Schweser, served as an airplane mechanic at Camp Taylor in Alabama. And, Robert, the third in line, served in the navy. 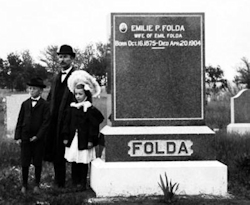 Not all those who served made it back home from the Great War. Some died in the training camps from measles, flu, dysentary, or other diseases. Some died when their ships were sunk on the way to Europe and many more, like Albin Folda (at right with his father and sister at his mother’s grave, Butler County Gallery) died on the battlefield. Albin’s grandparents had emigrated from Bohemia, looking for a better life in the United States. They found it on a Nebraska farm they homesteaded fifty years before their twenty-four year old grandson died in France.