Posted on December 9, 2016 by Cathy Hatterman 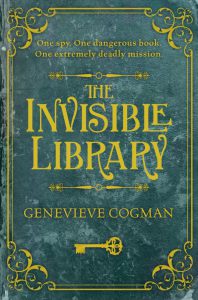 Irene is a librarian, a junior librarian of The Invisible Library, which spans alternative worlds and saves and secures copies of unique books. She answers to a senior librarian, much older & more experienced, and unable to leave the library to secure texts for the library. She’s not unique except that both her parents are librarians, as well. She isn’t 007. She knows she has a lot of experience to gain yet, and one of those experiences she needs to face is training an apprentice. And the time has finally come. Her first trainee is Kai, a tall, dark, beautiful young man of mystery. And their first mission together is nearly stolen by a competitor of Irene’s. The world they enter is a clockwork world of 1890 era, but also infected with “chaos”, meaning that there are creatures of magic and legend at work here. The most chaotic of them all are the Fae, personified in Lord Silver, a diplomat. The book they were to take, has already been stolen, but it’s unclear who’s done the deed–a famous catburgler who may have killed the new owner, or a cult of clockwork engineers who are anti-magic (the deceased was a vampire.) The waters are further muddied by the “great detective”, who has a better relationship with the local police than S.H. And a particularly frightening rogue librarian that was once one of the library’s greatest librarians. The characters are wonderful, Irene is someone you will want to read about–whether she’s running from granite gargoyles or escaping from cyborg crocodilians. And unlike 007, she’s often wondering why she can’t just have a nice screaming fit, oh yes, that’s right, she has to get herself out of this. Whatever this is.  Kai has his secret, which I won’t reveal, but he is young, and while handy to have around, he’s still learning. Irene and other librarians have the ability to use “the Language”, to open, close, manipulate objects, and to a certain limit, people. It’s a sort of World re-arranging type of magic, rather than the chaotic brand that the Fae use. Kai has his own talents. The world building is excellent. Just when you think, oh, yes, I’ve seen this, something new happens, a mini zeppelin takes off from the roof of the British Museum, headed for the British Library.  Or at Lord Silver’s ball, when Irene’s just about to get information about the book they are after, her competition strolls in, wearing a stunning Worth gown, with an adoring pack of men. But you’ll have to read it yourself! I’m waiting for the sequel, The Masked City.
This entry was posted in Books & Reading and tagged Friday Reads. Bookmark the permalink.