Posted on June 10, 2016 by Allana Novotny
A few weeks ago, I wrote a post titled “Cats Rule and Dogs Drool” that highlighted the cat photos in Nebraska Memories. I don’t want to offend dog lovers, so today’s post has gone to the dogs.

While I don’t know if any of the cats were drooling in the photos, I do know when comparing the number of cat pictures to dog pictures in Nebraska Memories that dogs definitely rule. There are only 11 photos of cats in the collection compared to 70+ photos that contain at least one dog. To be fair in a number of the photos the dog is not the center of attention and is just part of the crowd. This is true in this 1927? photo of a group of men and a dog standing in front of the Seefus Tavern and confectionary store in Valley, NE. In the description of the photo, you will find the names of all of the men, but the dog will forever be nameless.

You can also find dogs included in

many of the family photos that were taken in front of the house. The Fred Schumacher family had at least two dogs that were included in their picture. Looking at the picture, I wonder if that white spot over by the chickens is a cat. The family in this photo, entitled People and dogs in front of sod house, included two large dogs in their photo. I wonder if the chicken was included on purpose or if it just wandered into the shot.

In other photos, dogs can be spotted front and center.

e man in the front row of this photo of the Crawford fire department is holding a dog sitting in the front row with him. The German prisoners of war at Camp Atlanta and the 1906 Nebraska State Normal School at Kearney football team also chose to include dogs in their group photos.

As you can see, some dogs were put to work. This man on a horse has a group of five dogs with him. Have you ever seen a Dog walking on a tight rope? That was one well-trained dog. 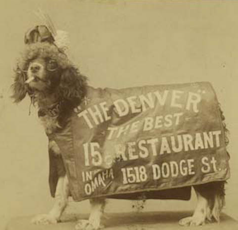 I don’t know what to say about this poor dog who was dressed up to advertise the Denver Chop House Restaurant in Omaha. To me the banner looks like it was designed for the dog to wear so he/she might have be used to that. Was the dog also trained to stand still wearing the wig, hat, and glasses? Do you think the dog actually had the cigarette in his mouth, or was it “photoshopped” in later? I asked a coworker this question, and she assumed it was really in the dog’s mouth because she didn’t realize people have been manipulating images since the 1800’s. You can see a few examples of manipulated photos in the, “What did it really look like?” blog post. I’ve saved the cutest photos until the end. The Butler County Gallery collection in Nebraska Memories contains photos taken by the professional photographer Harvey Boston. As you can see, many people had pictures taken with their dog. 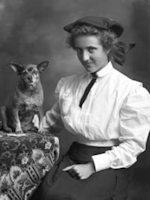 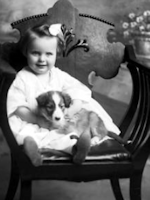