Friday Reads: The Library of Shadows

I discovered The Library of Shadows, by Mikkel Birkegaard, while browsing the shelves of a Borders store that was having a Going Out of Business sale. Of course, it caught my eye because of the word Library in the title. And the cover looked kind of supernatural, which definitely made it even more attractive to me. I wasn’t completely sure about it though, when I saw that it was translated from the Danish. But, I’m glad I picked it up, because it ended up being a really good story! 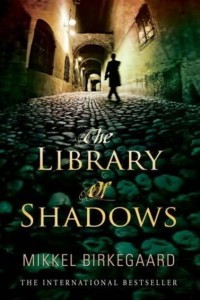 As it turns out, there are people in the world who, when they read books aloud, can control how others feel and think – manipulating listeners and immersing them completely into the story. They are called Transmitters. On the other side, there are also people who can connect with a Transmitter, called Receivers. They can focus the energy of a Transmitter, enhancing their storytelling ability, making the effect of their reading even stronger. Together, they are part of a secret society who’s original goal was to help people develop a better enjoyment and understanding of literature. But, as happens with powers like these, there are other factions who have used these abilities for nefarious purposes.

As you read the book, you are discovering this strange new world along with Jon Campelli, who has inherited a bookshop from his father, which just happens to be a secret gathering place for people with these talents. Jon’s father has most likely been murdered and then the shop is fire bombed, forcing him to explore this mysterious society as he tries to solve his father’s murder and find out what the shadowy group who committed these crimes is really up to.

Since Jon knows just as much as you do about these people, meaning absolutely nothing, a reader can easily identify with him and understand his confusion and awe as he learns more about them. It’s a very original story concept, at least I’ve never heard of anything like this. In between the fast-paced action scenes, and many cliffhanger chapter endings, the history and workings of this ancient organization are very well developed. If you are a fan of mysteries, magic, and reading, I think you’ll enjoy this one.