Posted on November 13, 2015 by Christa Porter
Zombies, vampires, ghosts, demons, and other undead citizens like to go on vacation, just like you and me. And, when they visit a new city, they also use travel guides to find the best activities and locations to check out. But, they can’t use just any travel guide. There are certain things that nonhumans need to know about the cities they visit – there are resources and establishments that cater specifically to them. Zoe Norris edits those kinds of travel guides for Underground Publications, a company that specializes in producing travel guides for the coterie, as the nonhumans prefer to be called. 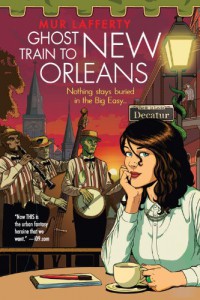 Ghost Train to New Orleans is the second book in The Shambling Guides series written by Mur Lefferty. In what I know will upset many other readers, I read this book first. New Orleans is one of my favorite cities to visit, so I jumped on it first. The first book is The Shambling Guide to New York City. There are many references to the first volume throughout Ghost Train to New Orleans, and some of them could be considered spoilers, but they didn’t have a detrimental effect on my enjoyment of this book. They just made me want to read the first one even more! After the success of her first travel guide to New York City, Zoe and her co-workers are sent to New Orleans to research the sequel. What could be a relaxing trip ends up being anything but. Her boyfriend is slowly turning into a zombie, the city is trying to talk to her about a new threat to Zoe, and her writing team of vampires, death goddess, Valkyrie, and dragon just can’t get along with each other. I found this urban fantasy to be a really fun read. The supernatural characters are creatively written, not at all what you’d expect. And the descriptions of New Orleans and use of the city in the storyline were perfect. I’m already planning my next trip there, and will definitely be checking out some of the locations that Zoe visited. Maybe I’ll even see some of her readers on holiday.
This entry was posted in Books & Reading and tagged Friday Reads. Bookmark the permalink.