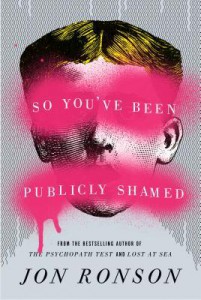 In history’s darker days, ne’er-do-wells were marched to public squares, sometimes by mobs waving torches or pitchforks, and displayed publicly as punishment.  Here in 2015, most of us don’t have pitchforks or torches at home.  But almost all of us have Facebook or Twitter or Reddit accounts.  We also have the same basic impulses that drove extrajudicial justice in the past.

This is where Jon Ronson’s latest book begins.  Times and tools have changed, but people haven’t.  Some people still exhibit offensive (if not really criminal) behavior—plagiarism, insensitive jokes, outright lying.  And some other people don’t like it and aren’t afraid to use the tools at hand to do something about it.

It’s probably never been fun to be publicly shamed.  But, in the past, you’d eventually stop riding the rail, or go home and wash the tar and feathers off.  At worst, you could move to a different village.  Public shaming on the Internet has a bit more permanence.  How do you ever move forward with your life when your bad deed has been retweeted thousands of times?  How do you get a new job when that employer Googles your name and sees very cringeworthy images?

This book answers these questions and (re)introduces the reader to some famously shamed people.  Those who have read Ronson’s The Psychopath Test and exquisite Them: Adventures with Extremists will recognize his narrative multitasking and brisk style.  For a book with such substance, this is an exceptionally quick read—you can finish it in an afternoon—and it’s worth your time.  The anonymous “mob justice” aspect of the Internet, which sometimes gets things extremely wrong, continues to grow anyway (and probably won’t be limited to shaming only the worst offenders).  This book is all about that behavior and might make you rethink your next Send, Like, or Share.