The Data Dude – Robots in the Library Makerspace 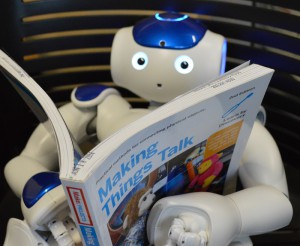 The Dude has been on vacation (and after travelling with two kids ages 4 and 8, discovered that there are some pretty decent shows on Cartoon Network—favorites include Uncle Grandpa, the Regular Show, Steven Universe, and Teen Titans Go!), but wanted to share an article about the Westport Public Library in Westport, Connecticut. Two things caught the Dude’s attention: (1) The robust makerspace at this library – specifically, the acquisition and availability of robots; and (2) the possibilities for programming these robots, as evidenced by their Tai Chi demonstration. For the record, the Dude is a student of Chen style Tai Chi; it looks like the robots are programmed to do some type of Yang style. It’s not that one is necessarily better than the other, but there are differences. Nonetheless, it interestingly illustrates what can be done in this library’s makerspace. The draw to the robots is similar to the idea of libraries offering the CoderDojo, except in this instance you are programming the robot and not websites, games, and apps. These robots can speak 19 different languages. If you are considering expanding your makerspace offerings, check out the makerspace section of Westport’s website, complete with videos and a blog. Shaka.