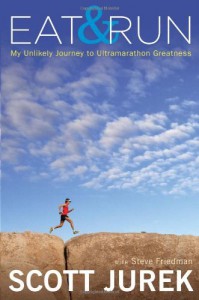 A few years back I discovered a documentary movie called Running on the Sun, about a brutal footrace called the Badwater 135 (that’s a 135 mile run through Death Valley, CA, in mid-July, often referred to as “the world’s toughest foot race”). If you have a chance, check it out. You can watch it all online, complete with German subtitles. It is a bit dated and there are other videos out there that might also be of interest (just do a search). Let’s just say up front that I never had any desire for these kinds of things, but after watching Running on the Sun, I became moderately interested in ultramarathon runners (defined as any running event that is longer than a marathon). My own running has waxed and waned over the years, settling on moderate amounts of mileage and hit and miss unstructured workouts. My interest in these ultra-events (sans particpation in them) extended to books and documentaries, including the self-promoting “Ultramarathon Man” Dean Karnazes. I don’t know if I’d describe him as outright arrogant or a just a peacock – the term given to guys who frequent running races or triathlons and strut around with their shirts off. I heard about another ultra guy named Scott Jurek when I read Christopher McDougall’s Born to Run, which seemed much less arrogant and peacock free.

Jurek has written a book called Eat and Run. The appeal of Jurek is that he comes across as a down to earth modest guy, the antithesis of Karnazes. Jurek writes about his upbringing in Minnesota, candidly describing the care he gave to his mother during her suffering from multiple sclerosis. He also describes how he got started in the world of ultramarathon racing, and his climb to the near top, if not the top. The stories are entertaining, not just for the incredible racing feats, but because of the authenticity and humility that bleeds through in his writing. The other piece to Eat and Run is that Jurek only eats plant based foods, and some of his favorite vegan recipes are scattered throughout the book. Even if you are carnivorous and have no desire to change that fact, you might be motivated to try some of his recipes. I liked the Holy Moly Guacamole and  Hemp Milk. Like many endurance athletes, Jurek has a great philosophy of life. A couple of notables:

“Every single one of us possesses the strength to attempt something he isn’t sure he can accomplish. It can be running a mile, or a 10K race, or 100 miles. It can be changing a career, losing 5 pounds, or telling someone you love her (or him).”

“We all lose sometimes. We fail to get what we want. Friends and loved ones leave. We make a decision we regret. We try our hardest and come up short. It’s not the losing that defines us. It’s how we lose. It’s what we do afterward.”