Friday Reads: Just One Damned Thing After Another: v.1, The Chronicles of St. Mary, by Jodi Taylor

Just One Damned Thing After Another: Chronicle of St. Mary’s, by Jodi Taylor shows how historians are trained to “investigate major historical events in contemporary time.”, but don’t call it time travel! Actually, I started this series with what I thought was the last book, Lies, Damned Lies, and History, v.7 and was so intrigued with the characters that I wanted to start the series from the beginning! 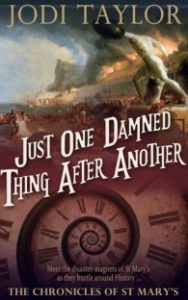 Just One Damned Thing After Another by Jodi Taylor

It begins with Max, (Madeline Maxwell), a disruptive, unhappy, student, being mentored in school by her head teacher. Next, a letter from the same head teacher, guides her from academe to the doors of St. Mary’s Institute of Historical Research, an adjunct of the University of Thirsk. Taking the tour of the facility with her mentor, she notices some oddities: little remarks about not having had an interview, she notices they have a security section, and a hanger named after Stephen Hawking. Finally she has “the interview” with the facility, which is when the real reveal of what they do at St. Mary’s occurs. Since she studied archeology and anthropology, with emphasis in Greek and Roman times, and has experience in archeological digs, she jumps at the chance to time travel.  She signs up, and joins a small class of would be “historians”.

It is set in the UK in the fairly near future. The  relationship with the University is of course fraught with politics and academic tensions. The borders of America (The United Sates) have been closed. And a great deal of funding is going toward Mars exploration, or a possible manned Mars trip. And, as a side note, all of this is run by some members of the same institution, but from a future form of the same institution. And the muse of history is the director’s PA (personal assistant).

While it isn’t perfect, the series is fun, raucous, accident prone, and in turns, deadly serious and on a dull weekend, or too cold, or too hot Nebraska day, the perfect antidote to very nearly everything. If you grew up on James Bond, Benny Hill, Saturday Night Live, Dr. Who, Monty Python’s Flying Circus, or simply like any or all of those shows, this is just the thing for you! Especially if you don’t mind it filled with really interesting parts of History, that feel well researched.

Chronicles of St. Mary, in order, as best as I can tell:

Various Short Stories–Please muddle through them as you will!