Here are the UNP books the Clearinghouse received in June: 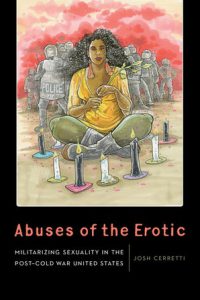 Josh Cerretti takes up the urgent task of applying an interdisciplinary, transnational framework to the role of sexuality in promoting, expanding, and sustaining the war on terror to understand the links between what Cerretti calls “domestic militarism” and later projects of state-backed violence and intervention. This work brings together scholarship on domestic and international militarization in relation to both homosexuality and heterosexuality to demonstrate how sexual and gender politics have been deployed to bolster U.S. military policies and, by tracking over a decade of militarized sexuality, how these instances have foundationally changed how we think of sexual and gender politics today.

Apostles of Empire : The Jesuits and New France 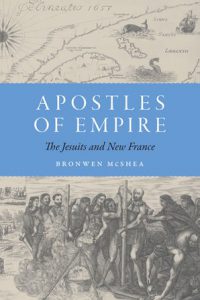 Apostles of Empire is a revisionist history of the French Jesuit mission to indigenous North Americans in the seventeenth and eighteenth centuries, offering a comprehensive view of a transatlantic enterprise in which secular concerns were integral. Between 1611 and 1764, 320 Jesuits were sent from France to North America to serve as missionaries. Most labored in colonial New France, a vast territory comprising eastern Canada and the Great Lakes region that was inhabited by diverse Native American populations. Although committed to spreading Catholic doctrines and rituals and adapting them to diverse indigenous cultures, these missionaries also devoted significant energy to more-worldly concerns, particularly the transatlantic expansion of the absolutist-era Bourbon state and the importation of the culture of elite, urban French society.

In Apostles of Empire Bronwen McShea accounts for these secular dimensions of the mission’s history through candid portraits of Jesuits engaged in a range of secular activities. We see them not only preaching and catechizing in terms that borrowed from indigenous idioms but also cultivating trade and military partnerships between the French and various Indian tribes. Apostles of Empire contributes to ongoing research on the Jesuits, New France, and Atlantic World encounters, as well as on early modern French society, print culture, Catholicism, and imperialism. McShea shows how the Jesuits’ robust conceptions of secular spheres of Christian action informed their efforts from both sides of the Atlantic to build up a French and Catholic empire in North America through significant indigenous cooperation. 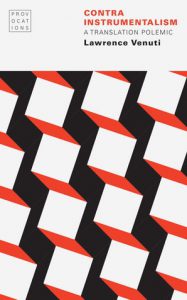 Contra Instrumentalism questions the long-accepted notion that translation reproduces or transfers an invariant contained in or caused by the source text. This “instrumental” model of translation has dominated translation theory and commentary for more than two millennia, and its influence can be seen today in elite and popular cultures, in academic institutions and in publishing, in scholarly monographs and in literary journalism, in the most rarefied theoretical discourses and in the most commonly used clichés.

Contra Instrumentalism aims to end the dominance of instrumentalism by showing how it grossly oversimplifies translation practice and fosters an illusion of immediate access to source texts. Lawrence Venuti asserts that all translation is an interpretive act that necessarily entails ethical responsibilities and political commitments. Venuti argues that a hermeneutic model offers a more comprehensive and incisive understanding of translation that enables an appreciation of not only the creative and scholarly aspects of what a translator does but also the crucial role translation plays in the cultural and social institutions that shape human life. 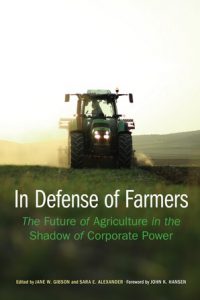 Industrial agriculture is generally characterized as either the salvation of a growing, hungry, global population or as socially and environmentally irresponsible. Despite elements of truth in this polarization, it fails to focus on the particular vulnerabilities and potentials of industrial agriculture. Both representations obscure individual farmers, their families, their communities, and the risks they face from unpredictable local, national, and global conditions: fluctuating and often volatile production costs and crop prices; extreme weather exacerbated by climate change; complicated and changing farm policies; new production technologies and practices; water availability; inflation and debt; and rural community decline. Yet the future of industrial agriculture depends fundamentally on farmers’ decisions.

In Defense of Farmers illuminates anew the critical role that farmers play in the future of agriculture and examines the social, economic, and environmental vulnerabilities of industrial agriculture, as well as its adaptations and evolution. Contextualizing the conversations about agriculture and rural societies within the disciplines of sociology, geography, economics, and anthropology, this volume addresses specific challenges farmers face in four countries: Bolivia, Brazil, Canada, and the United States.

By concentrating on countries with the most sophisticated production technologies capable of producing the largest quantities of grains, soybeans, and animal proteins in the world, this volume focuses attention on the farmers whose labors, decision-making, and risk-taking throw into relief the implications and limitations of our global industrial food system. The case studies here acknowledge the agency of farmers and offer ways forward in the direction of sustainable agriculture. 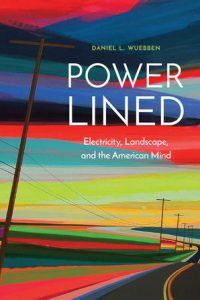 The proliferation of electric communication and power networks have drawn wires through American landscapes like vines through untended gardens since 1844. But these wire networks are more than merely the tools and infrastructure required to send electric messages and power between distinct places; the iconic lines themselves send powerful messages. The wiry webs above our heads and the towers rhythmically striding along the horizon symbolize the ambiguous effects of widespread industrialization and the shifting values of electricity and landscape in the American mind.

In Power-Lined Daniel L. Wuebben weaves together personal narrative, historical research, cultural analysis, and social science to provide a sweeping investigation of the varied influence of overhead wires on the American landscape and the American mind. Wuebben shows that overhead wires—from Morse’s telegraph to our high-voltage grid—not only carry electricity between American places but also create electrified spaces that signify and complicate notions of technology, nature, progress, and, most recently, renewable energy infrastructure. Power-Lined exposes the subtle influences wrought by the wiring of the nation and shows that, even in this age of wireless devices, perceptions of overhead lines may be key in progressing toward a more sustainable energy future.

The Supernatural Sublime : The Wondrous Ineffability of the Everyday 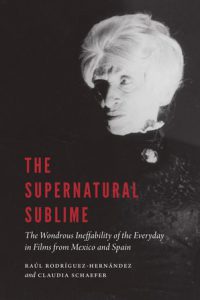 The Supernatural Sublime explores the long-neglected element of the supernatural in films from Spain and Mexico by focusing on the social and cultural contexts of their production and reception, their adaptations of codes and conventions for characters and plot, and their use of cinematic techniques to create the experience of emotion without explanation. Deploying the overarching concepts of the supernatural and the sublime, Raúl Rodríguez-Hernández and Claudia Schaefer detail the dovetailing of the unnatural and the experience of limitlessness associated with the sublime.

The Supernatural Sublime embeds the films in the social histories of twentieth- and twenty-first-century Mexico and Spain, both of which made a forced leap into modernity after historical periods founded on official ideologies and circumscribed visions of the nation. Evoking Kant’s definition of the experience of the sublime, Rodríguez-Hernández and Schaefer concentrate on the unrepresentable and the contradictory that oppose purported universal truths and instead offer up illusion, deception, and imagination through cinema, itself a type of illusion: writing with light. 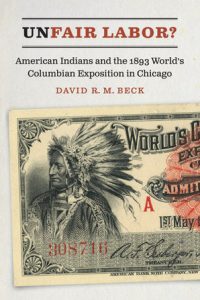 Unfair Labor? is the first book to explore the economic impact of Native Americans who participated in the 1893 World’s Columbian Exposition held in Chicago. By the late nineteenth century, tribal economic systems across the Americas were decimated, and tribal members were desperate to find ways to support their families and control their own labor. As U.S. federal policies stymied economic development in tribal communities, individual Indians found creative new ways to make a living by participating in the cash economy. Before and during the exposition, American Indians played an astonishingly broad role in both the creation and the collection of materials for the fair, and in a variety of jobs on and off the fairgrounds.

While anthropologists portrayed Indians as a remembrance of the past, the hundreds of Native Americans who participated were carving out new economic pathways. Once the fair opened, Indians from tribes across the United States, as well as other indigenous people, flocked to Chicago. Although they were brought in to serve as displays to fairgoers, they had other motives as well. Once in Chicago they worked to exploit circumstances to their best advantage. Some succeeded; others did not.

Unfair Labor? breaks new ground by telling the stories of individual laborers at the fair, uncovering the roles that Indians played in the changing economic conditions of tribal peoples, and redefining their place in the American socioeconomic landscape.

We Average Unbeautiful Watchers : Fan Narratives and the Reading of 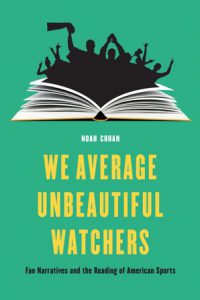 Sports fandom—often more than religious, political, or regional affiliation—determines how millions of Americans define themselves. In We Average Unbeautiful Watchers, Noah Cohan examines contemporary sports culture to show how mass-mediated athletics are in fact richly textured narrative entertainments rather than merely competitive displays. While it may seem that sports narratives are “written” by athletes and journalists, Cohan demonstrates that fans are not passive consumers but rather function as readers and writers who appropriate those narratives and generate their own stories in building their sense of identity.

Critically reading stories of sports fans’ self-definition across genres, from the novel and the memoir to the film and the blog post, We Average Unbeautiful Watchers recovers sports games as sites where fan-authors theorize interpretation, historicity, and narrative itself. Fan stories demonstrate how unscripted sporting entertainments function as identity-building narratives—which, in turn, enhances our understanding of the way we incorporate a broad range of texts into our own life stories.

Building on the work of sports historians, theorists of fan behavior, and critics of American literature, Cohan shows that humanistic methods are urgently needed for developing nuanced critical conversations about athletics. Sports take shape as stories, and it is scholars in the humanities who can best identify how they do so—and why that matters for American culture more broadly. 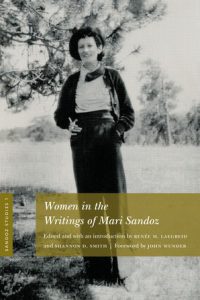 Mari Sandoz, born on Mirage Flats, south of Hay Springs, Nebraska, on May 11, 1896, was the eldest daughter of Swiss immigrants. She experienced firsthand the difficulties and pleasures of the family’s remote plains existence and early on developed a strong desire to write. Her keen eye for detail combined with meticulous research enabled her to become one of the most valued authorities of her time on the history of the plains and the culture of Native Americans.

Women in the Writings of Mari Sandoz is the first volume of the Sandoz Studies series, a collection of thematically grouped essays that feature writing by and about Mari Sandoz and her work. When Sandoz wrote about the women she knew and studied, she did not shy away from drawing attention to the sacrifices, hardships, and disappointments they endured to forge a life in the harsh plains environment. But she also wrote about moments of joy, friendship, and—for some—a connection to the land that encouraged them to carry on.

The scholarly essays and writings of Sandoz contained in this book help place her work into broader contexts, enriching our understanding of her as an author and as a woman deeply connected to the Sandhills of Nebraska.