Here are the UNP books the Clearinghouse received in March: 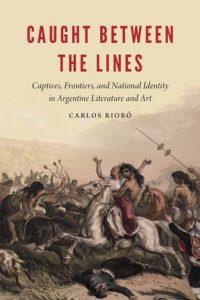 Caught between the Lines examines how the figure of the captive and the notion of borders have been used in Argentine literature and painting to reflect competing notions of national identity from the nineteenth to the twenty-first centuries. Challenging the conventional approach to the nineteenth-century trope of “civilization versus barbary,” which was intended to criticize the social and ethnic divisions within Argentina in order to create a homogenous society, Carlos Riobó traces the various versions of colonial captivity legends. He argues convincingly that the historical conditions of the colonial period created an ethnic hybridity—a mestizo or culturally mixed identity—that went against the state compulsion for a racially pure identity. This mestizaje was signified not only in Argentina’s literature but also in its art, and Riobó thus analyzes colonial paintings as well as texts.

Caught between the Lines focuses on borders and mestizaje (both biological and cultural) as they relate to captives: specifically, how captives have been used to create a national image of Argentina that relies on a logic of separation to justify concepts of national purity and to deny transculturation. 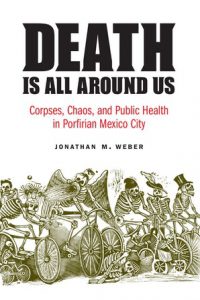 Late nineteenth-century Mexico was a country rife with health problems. In 1876, one out of every nineteen people died prematurely in Mexico City, a staggeringly high rate when compared to other major Western world capitals at the time, which saw more modest premature death rates of one out of fifty-two (London), one out of forty-four (Paris), and one out of thirty-five (Madrid). It is not an exaggeration to maintain that each day dozens of bodies could be found scattered throughout the streets of Mexico City, making the capital city one of the most unsanitary places in the Western Hemisphere.

In light of such startling scenes, in Death Is All around Us Jonathan M. Weber examines how Mexican state officials, including President Porfirio Díaz, tried to resolve the public health dilemmas facing the city. By reducing the high mortality rate, state officials believed that Mexico City would be seen as a more modern and viable capital in North America. To this end the government used new forms of technology and scientific knowledge to deal with the thousands of unidentified and unburied corpses found in hospital morgues and cemeteries and on the streets. Tackling the central question of how the government used the latest technological and scientific advancements to persuade citizens and foreigners alike that the capital city—and thus Mexico as a whole—was capable of resolving the hygienic issues plaguing the city, Weber explores how the state’s attempts to exert control over procedures of death and burial became a powerful weapon for controlling the behavior of its citizens.

Ecology and Ethnogenesis : An Environmental History of the Wind River

In Ecology and Ethnogenesis Adam R. Hodge argues that the Eastern Shoshone tribe, now located on the Wind River Reservation in Wyoming, underwent a process of ethnogenesis through cultural attachment to its physical environment that proved integral to its survival and existence. He explores the intersection of environmental, indigenous, and gender history to illuminate the historic roots of the Eastern Shoshone bands that inhabited the intermountain West during the nineteenth century.

Hodge presents an impressive longue durée narrative of Eastern Shoshone history from roughly 1000 CE to 1868, analyzing the major developments that influenced Shoshone culture and identity. Geographically spanning the Great Basin, Rocky Mountain, Columbia Plateau, and Great Plains regions, Ecology and Ethnogenesis engages environmental history to explore the synergistic relationship between the subsistence methods of indigenous people and the lands that they inhabited prior to the reservation era. In examining that history, Hodge treats Shoshones, other Native peoples, and Euroamericans as agents who, through their use of the environment, were major components of much broader ecosystems. The story of the Eastern Shoshones over eight hundred years is an epic story of ecological transformation, human agency, and cultural adaptation.

Ecology and Ethnogenesis is a major contribution to environmental history, ethnohistory, and Native American history. It explores Eastern Shoshone ethnogenesis based on interdisciplinary research in history, archaeology, anthropology, and the natural sciences in devoting more attention to the dynamic and often traumatic history of “precontact” Native America and to how the deeper past profoundly influenced the “postcontact” era. 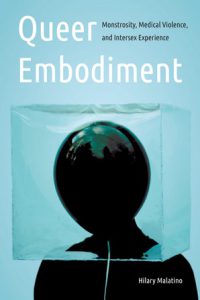 Merging critical theory, autobiography, and sexological archival research, Queer Embodiment provides insight into what it means, and has meant, to have a legible body in the West. Hilary Malatino explores how and why intersexuality became an anomalous embodiment requiring correction and how contesting this pathologization can promote medical reform and human rights for intersex and trans persons.

Malatino traces both institutional and interpersonal failures to dignify non–sexually dimorphic bodies and examines the ways in which the ontology of gender difference developed by modern sexologists conflicts with embodied experience. Malatino comprehensively shows how gender-normalizing practices begin at the clinic but are then amplified over time at both intimate and systemic levels, through mechanisms of institutional exclusion and through contemporary Eurocentric cultures’ cis-centric and bio-normative understanding of sexuality, reproductive capacity, romantic partnership, and kinship.

Combining personal accounts with archival evidence, Malatino presents intersexuality as the conceptual shibboleth of queerness, the figure through which nonnormative genders and desires are, and have been historically, understood. The medical, scientific, and philosophical discourse on intersexuality underlying our contemporary understanding of sexed selfhood requires theoretical and ethical reconsideration in order to facilitate understanding gender anew as an intra-active and continually differentiating process of becoming that exceeds and undoes restrictive binary logic. 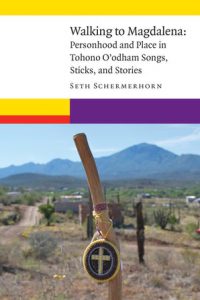 In Walking to Magdalena, Seth Schermerhorn explores a question that is central to the interface of religious studies and Native American and indigenous studies: What have Native peoples made of Christianity? By focusing on the annual pilgrimage of the Tohono O’odham to Magdalena in Sonora, Mexico, Schermerhorn examines how these indigenous people of southern Arizona have made Christianity their own. This walk serves as the entry point for larger questions about what the Tohono O’odham have made of Christianity.

With scholarly rigor and passionate empathy, Schermerhorn offers a deep understanding of Tohono O’odham Christian traditions as practiced in everyday life and in the words of the O’odham themselves. The author’s rich ethnographic description and analyses are also drawn from his experiences accompanying a group of O’odham walkers on their pilgrimage to Saint Francis in Magdalena. For many years scholars have agreed that the journey to Magdalena is the largest and most significant event in the annual cycle of Tohono O’odham Christianity. Never before, however, has it been the subject of sustained scholarly inquiry.

Walking to Magdalena offers insight into religious life and expressive culture, relying on extensive field study, videotaped and transcribed oral histories of the O’odham, and archival research. The book illuminates indigenous theories of personhood and place in the everyday life, narratives, songs, and material culture of the Tohono O’odham.
Pictures and synopses courtesy of University of Nebraska Press. 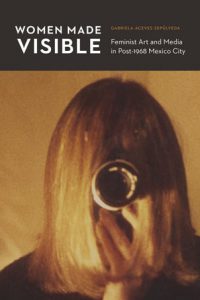 In post-1968 Mexico a group of artists and feminist activists began to question how feminine bodies were visually constructed and politicized across media. Participation of women was increasing in the public sphere, and the exclusive emphasis on written culture was giving way to audio-visual communications. Motivated by a desire for self-representation both visually and in politics, female artists and activists transformed existing regimes of media and visuality.

Women Made Visible by Gabriela Aceves Sepúlveda uses a transnational and interdisciplinary lens to analyze the fundamental and overlooked role played by artists and feminist activists in changing the ways female bodies were viewed and appropriated. Through their concern for self-representation (both visually and in formal politics), these women played a crucial role in transforming existing regimes of media and visuality—increasingly important intellectual spheres of action. Foregrounding the work of female artists and their performative and visual, rather than written, interventions in urban space in Mexico City, Aceves Sepúlveda demonstrates that these women feminized Mexico’s mediascapes and shaped the debates over the female body, gender difference, and sexual violence during the last decades of the twentieth century.

Weaving together the practices of activists, filmmakers, visual artists, videographers, and photographers, Women Made Visible questions the disciplinary boundaries that have historically undermined the practices of female artists and activists and locates the development of Mexican second-wave feminism as a meaningful actor in the contested political spaces of the era, both in Mexico City and internationally.

Pictures and Synopses from the University of Nebraska Press website: https://www.nebraskapress.unl.edu/