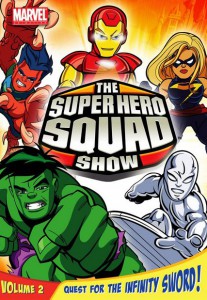 Today’s Wednesday Watch will be about the animated Super Hero Squad Show. Depending on the season, 2-3 Nebraska libraries have the Super Hero Squad Show on DVD. The characters, a rather large collection of Marvel super heroes, are drawn in a mini-version, similar to that of Chibi (a style of Japanese anime where characters are drawn in child-like fashion with oversized heads). For lack of a more appropriate synonym, they are, well, kind of cute. The main characters all have their own little bits of quirkiness which makes the show worthwhile, transcending the same ol’ good fighting evil story. For example, suave Iron Man is complicated and tech-saavy, albeit a bit too impulsive; Hulk is simple minded, strong, and of course has anger management issues that affect the rest of the group; Silver Surfer, while an alien, talks quite like a stereotypical surfer; Thor speaks in an Olde English tongue; Wolverine likes it cold and uses his claws to carve topiaries, just like Edward Scissorhands; Ms. Marvel is strong but temperamental at times. Not to mention a whole host of supporting characters that appear, including the recurring villains. Stan Lee is the mayor of Super Hero City. In addition to Ms. Marvel, female characters are represented by Black Widow, Storm, the Wasp, Scarlet Witch, and others. The side stories are what make the Super Hero Squad Show interesting. True, the way the characters are drawn is unique, but without a decent and creative storyline, this show would fail. It doesn’t, however (fail that is). The heroes do mundane things that one wouldn’t expect, such as engage in philosophical discussions, fight over the remote control, bicker about whom should clean things up (and household messes in general), and numerous references to pop culture. And those things are funny. Sure, there are juvenile potty type jokes, but nothing too over the top. If your library is looking for something to appeal to the young crowd that won’t be too tough on adults who might be sitting in, Super Hero Squad Show might fit the bill. Warning: the theme song will stick in your head, so watch out. Speaking of the theme song, a recurring notion that appears in the song and the show is the term “Hero Up!” Whenever the “squaddies” (that’s what they are called) are faced with an adverse situation or villainous infiltration, they use the phrase “It’s time to Hero Up!” If you watch the show enough, you may find this translate over to the other parts of your life. A few examples: Kids not motivated to clean their room? Tell them it’s time to Hero Up. Richard promised stats for the Dude last week but hasn’t gotten it done yet? Hey Richard: Time to Hero Up. You get the idea. Special thanks to the Shout! Factory folks for the permission to use the SHS cover art. Shaka.
This entry was posted in General, Library Management, Uncategorized. Bookmark the permalink.