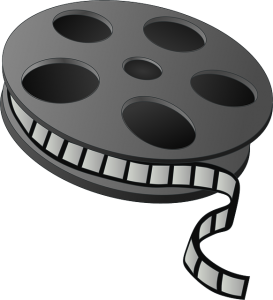 In order to keep up with the demands of writing something for every Wednesday, the Dude has been brainstorming ideas for filler material. Unlike Lori Sailors (Throwback Thursday), the Dude doesn’t have drawer after drawer full of interesting stuff to post. It’s quite possible that simple or complex graphs and charts… ahem, I mean data displays, could be regurgitated each week. But let’s face it; doing so would be at least unnecessarily repetitive and at best moderately boring. That’s not to say there won’t be blog posts on data displays, but the Dude needs something somewhat relevant to draw from in the case he suffers from lack of inspiration. Welcome to the Wednesday Watch. The idea here is that the Commission has somewhat regular sorts of columns, such as Throwback Thursday, Friday Reads, What’s Sally Reading, and others. Aside from Throwback Thursday, the others focus on books in library collections. Wednesday Watch will focus on video. As some may ask: What’s Sally Reading?  I’ll ask: What’s the Dude Watching? The Wednesday Watch column will likely be similar to Friday Reads, except the Dude ain’t reading it, he’s watching it. In some (but not all) cases, it’s possible he may read it and watch it. And the Dude isn’t going to apologize for the fact that he might not have read or even wanted to read it (or for the fact that he started a sentence with the word And). Please e-mail me if you’re interested in being a guest columnist in this buffoonery. The Dude could use the help.

Perhaps some of these things can be used in your collection development, or turn you or the visitors to your library on to something new. Now, before the librarian in you gets a little figety, let me clarify, the Dude still likes to read, and while he may choose not to read some evenings in favor of a video banquet, there’s certainly nothing wrong with that. So, let’s start this Wednesday Watch by listing a few movies that are generally known to be better than the books. Or, let me clarify, perhaps some of these were better than the books, perhaps others weren’t necessarily better, but they at least did the books justice. It is, however, a matter of taste, and let’s acknowledge that.

So for today, let’s just say that in some instances, the book may not always better than the movie (rule #1: There are no universals in our world). And let’s also say that sometimes the movie or TV series is in higher demand than the printed material. Deep down you know that it’s true, but for some reason the librarian gene (or the librarian learned pretentiousness in you) says it’s wrong to think so. The Dude is telling you its ok, or at least it’s ok with the Dude. On to the list:

The Godfather
Psycho
Blade Runner
Die Hard (have you ever even heard of the book? ‘Nuff said)
Jaws
Apocalypse Now
Shawshank Redemption
Requiem for a Dream
Silence of the Lambs
Stand by Me
Goodfellas

This entry was posted in General, Library Management, Uncategorized. Bookmark the permalink.

One Response to The Data Dude – Wednesday Watch