As National Library Week comes to an end I wanted to highlight a few of the sixty plus Carnegie libraries that were built across Nebraska. When talking about Carnegie libraries I’m referring to those libraries built with the help of Andrew Carnegie. According to information on the Library of Congress’s website Carnegie helped to build over 2,500 libraries worldwide. You may also recognize his name in connection with the Carnegie Hall and Carnegie Mellon University.

The first building I want to highlight is the Chadron Public Library. The bulding is located at 507 Bordeaux St in Chadron as is still the current home of the Chadron Public Library. The building was designed by George Berlinghof of Lincoln who received $100 for the architectural plans. The building was completed in 1911. Comparing the photo of the library in Nebraska Memories taken sometime in the 1920’s to a more recent photo taken in 2006 you can see the front of the building is relatively unchanged. The most noticeable change is the removal of the decorative windows. According to the National Register of Historic Places Registration Form these windows were removed in 1964 as part of effort to make the building more energy efficient. 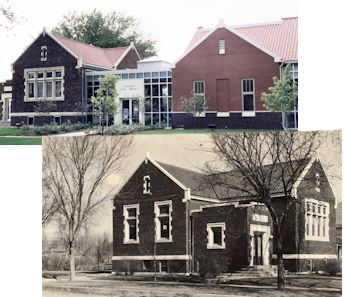 Let’s head a bit southeast and look at the Gothenburg Public Library. The library is located at 1104 Lake Ave in Gothenburg. This Carnegie library was completed in 1916. Comparing the recent photo and the historical photo you can see that an addition was added that mimics the lines of the original building. 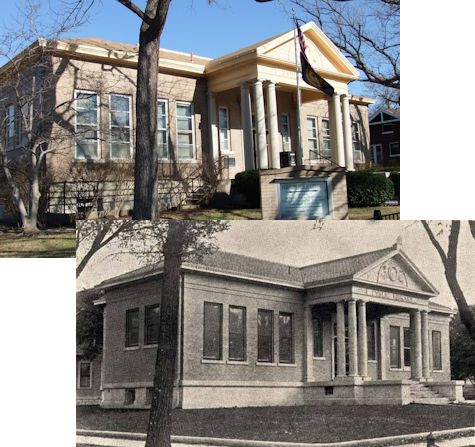 For our last stop let’s look at the Fairbury Public Library. The library is located at the corner of 7th and F Street. Carnegie donated $12,500 for the library which was built on a lot purchased by the city for $2,500. The building was designed by Tyler and Son of Lincoln. It opened to the public in December of 1909 and is still being used today.

As I was researching the Fairbury Carnegie building I found an article in the 1908 North Platte semi-weekly tribune that mentioned that the town of Fairbury was asking Mr. Carnegie for additional funds. The article also stated: “They Library will be practically a duplicate of the one at Kearney.” 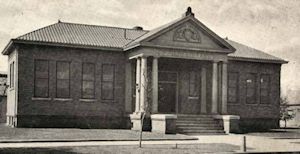 Comparing the historical images of the Fairbury Public Library and the Kearney Public Library I was surprised to see how similar they looked on the outside. Unfortunately we can’t compare current photos of the Carnegie buildings because the building in Kearney was torn down in 1975. We can however see what the Adult Reading Room and the Children’s Room looked like in the Kearney Carnegie building in the 1920’s.

This entry was posted in General, Information Resources, Nebraska Memories. Bookmark the permalink.